Many of us who attended St Norbert's High School were actually from St. Kevin's Parish. St. Kevin's didn't have a school at first and the older kids all went to school at neighboring parishes. I went to St. Aloysius in Romulus until 6th grade, St. Rapheal's in Garden City for 7th and 8th, and St. Norbert's for 9th to 11th grades. (My family moved to Plymouth early in 1969 and I graduated from Plymouth High in 1970.)

Other kids in the parish went to St. Mary's in Wayne, and (if I remember correctly) some went to Divine Child in Dearborn.

We still had catechism classes at St. Kevin's though. On Saturday mornings we went to an old farm house on Henry Ruff Road. I remember that my First Communion classes met in its kitchen. There were boards across the sink to serve as the teacher's desk and we were discouraged from using the bathroom because it would interrupt the class being held in the living room.

Those of us who went to St. Aloysius remember the long ride in the rickety old school bus. There were more students than there were seats so the last few to board the bus had to sit on stools in the aisle.  There were holes in the floor and someone would always get splashed if was raining. Most of the windows were stuck shut making it almost unbearable on hot days.

The bus broke down a lot. I remember one trip home when the hood came off the bus, slid over the roof all the way to the back and ended up lying in the road behind us. The driver didn't even stop. There were many times when the parents formed an emergency car pool to drive everyone home.

Sometimes we did homework during the long ride but we usually found other ways to amuse ourselves. We all listened to Alan Shephard's entire space flight in 1961 on a portable radio with its antenna sticking out the window. We sang "She loves you, yeah, yeah, yeah" over and over when The Beatles appeared on the Ed Sullivan Show. And once we tried to fly a kite out the window, which the driver found less amusing than the rest of us.

Mike "Bo" McCahill, Mike Bratcher, Emory Fasano, my sister Sue, and I were among the St Norbert's alumni who went to St. Aloysius in the early '60's.

St. Raphael's was on Merriman Road just north of Ford Road. There were too few us to justify a bus so to make the two mile trip to school we would walk, ride our bikes, or wheedle one of our parents into driving us. If we couldn't get a ride (most days), we usually walked because then we could cut across Garden City Park at Cherry Hill and Merriman, hop the fence on the north side of the park and shave a full 10 minutes off our travel time. The girls made the boys turn their backs so we wouldn't see anything unladylike as they climbed over the fence. Sue ripped the hem of her skirt on the fence once and we had to stop at a store on Merriman and buy safety pins with our milk money.

One day at the end of winter, I was wearing my winter coat and it started raining on the way home. My coat soaked up the water and got heavier and heavier and heavier. I finally took it off and dragged it the last few blocks. My mom was incredibly angry with me and said I would probably catch pneumonia and die, but I didn't. The coat was never the same though.

Sandy Waldecker, Sue, and I are the only St. Norbert alumni whose names I can remember, but I know there were others who walked with us.

Most of the people from St Kevin's lived west of Middlebelt Road and it was about a half hour walk to St. Norbert's. Emory Fasano lived on my street and we often walked together. I also remember meeting up with Mike McCahill in front of the Glendale Party Store on Middlebelt Road on a regular basis.

The new building hadn't been built when we first started at St. Norbert's and we had classes in the grade school building - in the two rooms closest to Inkster Road. We started using the new "High School" the following year. I seem to remember that there were only 3 classrooms in the new building, and one of them sat empty the first year.

There was an event to mark the opening of the new building and Kevin Coyle wrote a "school song" that was sung to the tune of The Marine Corps Hymn. We practiced that song for weeks then sang it for our parents one evening.

One winter day we arrived at school and found that the doors were still locked. We waited outside in the cold and many of the girls stooped down to cover their legs with their skirts to keep warm. When the doors finally opened and we were settled in our classrooms, we received a stern lecture about proper behavior. Evidently, gentlemen were expected to offer their coats to young ladies who were cold. The doors were always open after that, so I never had to put my chivalry to that particular test.

Another especially cold day we got a ride to school from somebody's father and we all piled into his 9-passenger station wagon. The heater didn't work but he had to keep the blower going so the windows wouldn't fog up. We drove to school with freezing air blowing over us. It probably would have been warmer to walk, but we got there faster so I guess it all evened out.

I imagine Cherry Hill High had to make quite a few adjustments for the Shared Time Program. I remember a discussion about Creation during a Science class. I'm sure that was added to avoid offending the "religious school" students.

There were two Shared Time groups for each grade and we switched schools in the middle of the day, but we all ate lunch at Cherry Hill. I remember the cafeteria being very crowded and some spectacular arguments over chairs. In one memorable dispute for a chair, I ended up sitting on the floor after my opponent jerked the chair out from under me.

Since we were allowed to come and go during lunch, Jerry LaFrance and I decided to go "out to lunch" to celebrate the last day of our freshman year in 1967. We left at the beginning of the lunch break and walked up to Cherry Hill Plaza to eat lunch at a place there (was there a lunch counter at Cunningham's?) It took so long to make the walk and to get served that we knew we would never make it back on time, so Jerry called his mother to drive us back to school.

The Shared Time students were also excused from taking a gym class. We had a Health class at St. Norbert's instead. Sister Florida decided that we were old enough to begin learning certain things and I remember an extremely embarrassing discussion that involved prostitution and venereal disease. There was also a quiz about different kinds of teenage skin ailments. I think I would have rather done jumping jacks.

The Shared Time Program was a statewide attempt to provide schooling to the baby boomer generation. Not many school districts participated and it only lasted a few years. Eventually the courts ruled that a program such as ours violated the separation of church and state by "illegally subsidizing religious instruction." There will never be a program like the one we had at St. Norbert's and Cherry Hill High. (Shared Time still exists today but in a limited fashion and only for certain students in certain situations.) We alumni of St. Norbert's are among the few people who actually participated in that experiment and all in all I think we turned out better for the experience. We lived in interesting times.


[Note:  I know that there are many others who were part of the St. Kevin's connection to St. Norbert's and I apologize for not remembering your names. If you were in that group, or if you can provide any corrections, information, or memories, please post a note in the Alumni Forum. Or better yet, write your own page of memories and submit them to the site.] 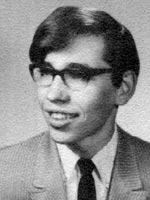 Steve in 2003
Sponsored by the St. Norbert's Alumni Group