Leslie "Les" Marinko submitted some rare historical documentation of St. Norbert student life. This includes a newspaper article on the creation of the Shared Time program. Les found three class pictures that are new to this site. He sent three St. Norbert's Messengers from 1968, 1974 and 1976, all with some school references. Check them out to see if your name is referenced. And other school/church related matters are offered, including a copy of the Cherry Hill Student Handbook, which every student memorized.

Class pictures are of years 1963-64, 1964-65, and 1965-66. Graduation articles he offered are his 1968 Elementary School Diploma, the 1971 High School Graduation Announcement, two family photos showing Les in cap & gown with his older sister Julie (1970), and processing into St. Norbert's Church. Also found was a make-up class list that had to be completed in the summer of 1971 as a requirement of graduation. This is explained in the St. Norbert's messenger of August 1, 1971, on account of the closing of St. Norbert's High School.

From Detroit newspapers are displayed articles from March 9 & 10, 1963 concerning the creation of a Shared Time program in the Cherry Hill School District, Michigan's first such program. St. Norbert's High School students would spend half-days at St. Norbert's and Cherry Hill High Schools, their degree being granted through Cherry Hill Public Schools. From other editions is the obituary of Father Graven printed in the Detroit Free Press, p.6B, Thursday, January 18, 1990; and seen in the Detroit Times, on December 19 and 21, 1959, are articles about former St. Norbert's priest, Father Adolph Pazik, and his struggles with multiple sclerosis. 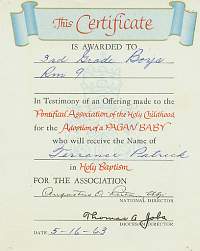