This page may serve as an example of what may be done with those obscure items you have been hiding these past decades. My mother saved what few scraps I failed to keep from her grasp. The remainder is consigned to imagination and myth. These report cards may elicit from St. Norbert alumni the recollection of teachers and fellow students and a more simple, if not otherwise stressful, academic existence.

A few historical notes are of interest outside of the poor grades. In 1959 the grade school principal was Sister Clare Cecile, O.P. She remained in that office until the 1962 school year when Sister M. Mercita succeeded her. I believe she remained Principal through my graduation in 1970. A list of teachers can be culled from these images, from the early years are Mr. Giles, Mr. Ejax (if I decipher the spelling correctly from my report card envelope), Mrs. E. Burke, Sr. Francis Cecile, Mr. Beagen, Sr. Helen Jude, Sr. Joan Henrice, and our perennial favorite, Sr. M. Florida (what did the "M" stand for?).

It is amusing to look through the report cards and see on which items the students were graded. Those were the days of "Good Habits" of Study and Courtesy. Wouldn't our world be a better place if these grades still mattered in today's classrooms? There was even a check box for Tuition! Lest any parent forget how dearly it cost to send their child, all eight of them, to parochial school! The demerits I received in "Lack of attention in class" would carry me through the full term of my childhood, a character flaw left unbanished until long after high school when I finally decided to attend college. Another fault needing attention, "Works without disturbing others," makes me wonder how I didn't get kicked out of the Third Grade. The area "Has necessary school materials" I am sure can be blamed on the minimal wage my father earned, that there were 8 of us kids to push through school, and that my mother held no income generating office outside the home. They did what they could and we survived.

The style of report card changed after the Third Grade. From grade four through eight a slightly more mature list of Character Formation traits were considered. There still were sub-headings of Effort and Study Habits, and Conduct, but a few items were refined for the growing child. "Works without disturbing others" simply becomes "Concentration." Dropped is "Complies with bus regulations;" that was for babies. "Needs constant supervision" became simply "Self-appliance." Yes indeed, the formative grades between four and eight would assist the child to forge a new world.

So take a few minutes and browse the following documents. The ones you lost so many years ago were no doubt quite similar. The grades were no doubt a bit better, I would guess. Please let this encourage you to send any of your images so others can be similarly edified if not merely amused. Write to <alum@stnorberts.com > and submit electronic or physical copies. We can tell you how if you have an interest. 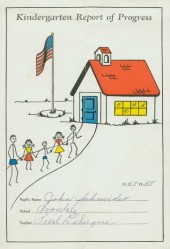 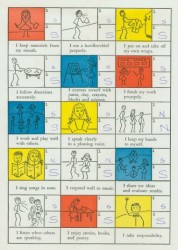 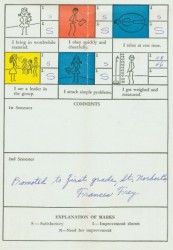 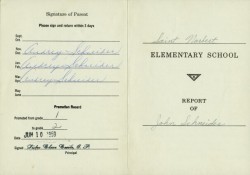 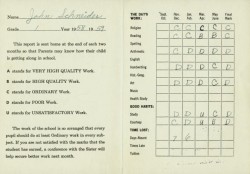 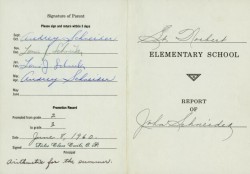 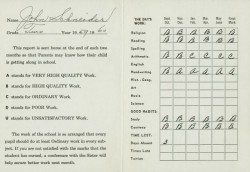 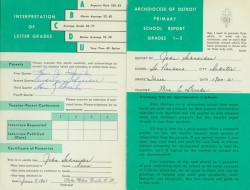 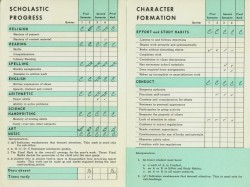 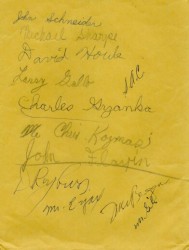 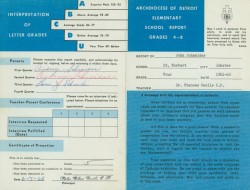 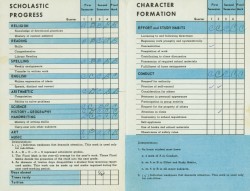